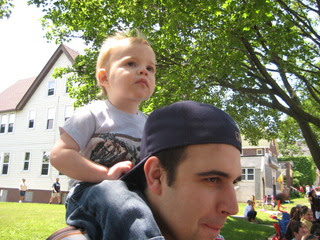 So I found out at 9:30am yesterday that Bay View has a parade on the 4th...and it goes right through the intersection three houses away from us! We could watch it from our front step...pretty cool. The Brewers Racing Sausages were in it, but I didn't have the camera on me until they were racing down the street...


That picture is especially for you, Dad!

Street sweeper...end of parade!
There were WAY more pictures but only some of them uploaded correctly.
On the way home, the monkey was very tired...the parade was 2 hours long, after all!

He fell asleep holding a stick he found at the parade!

After all that, we decided to grill out:

and Eli and Daddy read books:

After dinner, Elijah needed a bath to get the ketchup, BBQ sauce and other food out of his hair:


Then we decided to just hang out outside with the monkey until he had to go to bed: